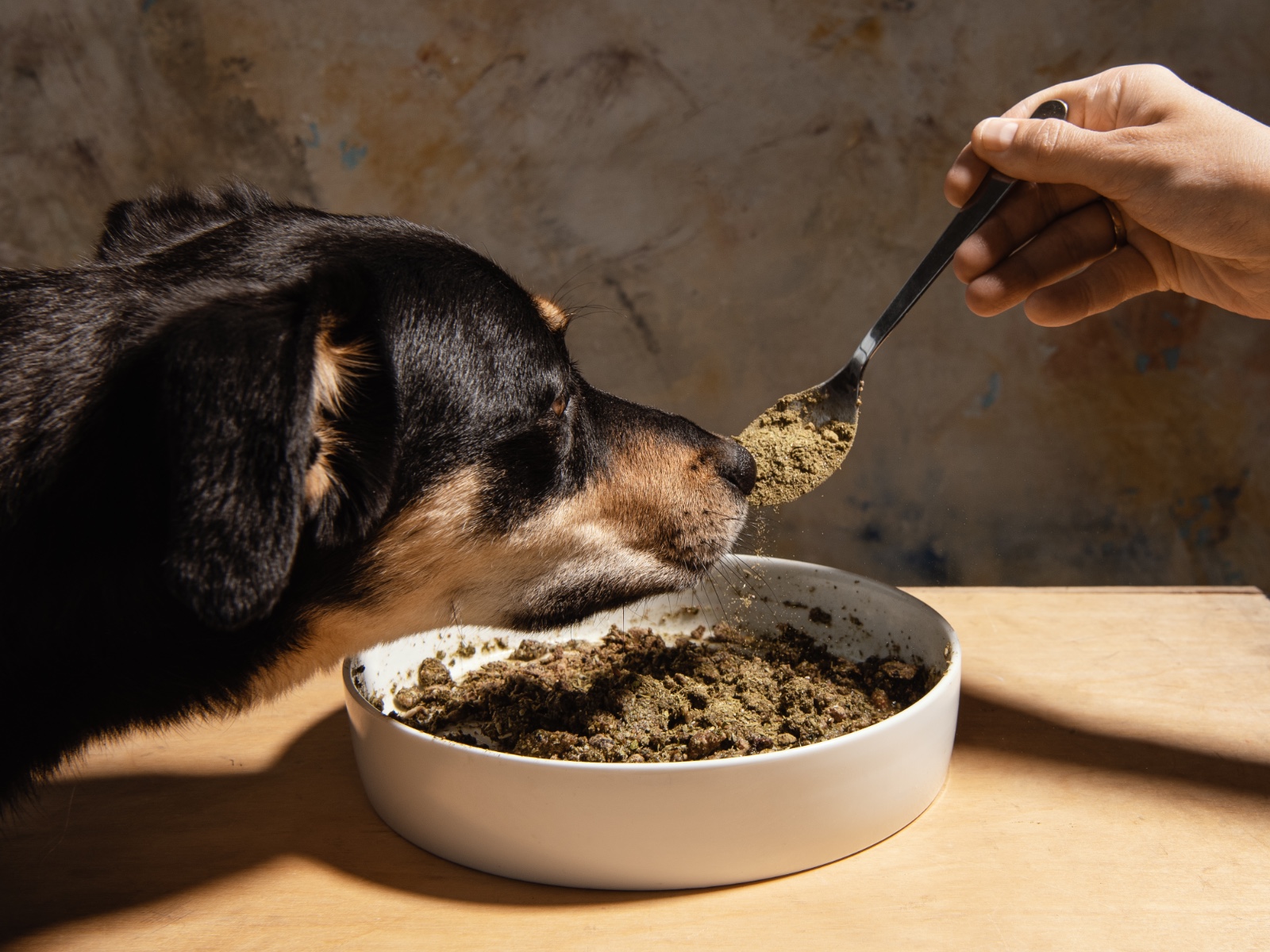 Dogs have been domesticated alongside humans for 1000’s of years, surviving off general human meal leftovers and wastage such as meat, bones, peelings, crumbs, rendered fats and veggies such as potatoes and cabbage.

As a part of this domestication, they have naturally adapted to an omnivorous diet to survive, including developing more copies of the AMY2B gene; which creates amylase via the pancreas for them to digest carbohydrates, especially starch.

This is the unique distinction between a domesticated dog and a wolf. Some domestic dogs have more copies of the AMY2B gene than others, such as the English Springer Spaniel having the most and the Japanese Akita and Shiba Inu having the least, albeit more than their distant cousin, the grey wolf (1).

This evolutionary change gives dogs the ability to digest and utilise the bioactive compounds found in plants, such as but not limited to flavonoids, beta-glucans, astaxanthin, iodine, polyphenols, polysaccharides, and proteins. These compounds are simply nutrients that have a positive biological effect on the body.

The majority of kibble manufactured these days are primarily plant-based, with only a tiny % of animal origin, such as 4% chicken meal. The downfall is, the plant matter dogs are currently consuming is subjected to such high temperatures that they’re nutritionally dead with respect to bioactive compounds. All that’s left is the carbohydrates and starch contributing to obesity, diabetes, and cancer statistics. Because they are so sparse in nutrients, the manufacturers have to fortify them with synthetics (artificial ingredients: vitamins, minerals, trace elements and preservatives)

Many don’t agree with feeding plant matter to dogs because when it comes down to your dog’s nutritional requirements documented by the National Research Council (Nutrient Requirements of Dogs and Cats 2006), dogs do not need plant matter or any carbohydrates. They can get all that they need from eating other animals.

But the vast majority of dogs on our planet do not eat such a diet.

Even those eating a raw diet, following the 80/10/10 (80% muscle meat + 10% organ meat + 10% bone) principles to mimic whole prey can end up with nutritional deficiencies due to the limited commercial ingredients being used. Although this way of feeding your dogs would still be far superior to highly processed foods fortified with synthetics, plant matter can help fill in the gaps conveniently and cost-effectively.

All dogs will benefit from plant matter and bioactive compounds, especially those eating kibble and tinned meats. Ultra-processed foods lead to oxidative stress and free radical build-up in the body. This may then lead to various diseases such as cardiovascular issues (2).

The nutritional benefits of plant matter have been well documented throughout time, especially the power of antioxidants to combat free radicals (3). This is an essential factor that leads health professionals to tell us, humans, to have our “five a day” as part of a balanced diet.

Many humans are “too busy” and do not have the time to prepare and cook wholesome foods like the health care professionals would like us to do. Many rely on frozen foods, microwave meals, and general junk food reducing even table scraps to be of poor quality full of additives and preservatives.

The pharmaceutical industry has made convenient synthetic supplements to help humans get the recommended daily allowance of various nutrients, even fortifying our breakfast cereals with them (4). Fortified smoothies, shakes, and supplements are an ever-growing industry due to their convenience.

This convenience plays a significant role in the processing and formulation of pet foods. The pharmaceutical industry has partnered with the pet food industry to create convenient and time-effective “complete and balanced” pet foods based on the guidelines set by governing bodies as FEDIAF. They have adopted the NRC’s Nutrient Requirements of Dogs and Cats 2006. These are perfect for owners who are on the go and don’t have time to ensure their pets have all their nutritional needs catered to.

Unfortunately, synthetic versions are not as bioavailable as their fresh counterparts derived from fruits, vegetables, herbs, species, seeds, and nuts.

A diet inclusive of whole foods rich in bioavailable nutrients will always be superior at a cellular level. That is why Rocketo is proud to release a complementary plant-based topper designed to promote whole health by only using the finest organic or wild ingredients and then gently air drying them from raw to a temperature of 40°C in order to maintain their compounds bioactive.

You can feed this in a couple of ways:

Below is an image taken from our website that shows our organic/wild ingredients and nutritional lab results.

Below, we are going to cherry-pick three ingredients from the image above and give you some insight into why we selected them for this complementary plant-based topper.

This seaweed species is packed full of iodine, which may help support your dog’s thyroid. Thyroid health is essential because the thyroid is the secondary “Master Gland.” It controls the body systematically.

Bladderwrack also contains a compound called “Ascophyllum nodosum” which helps reduce the risk of periodontal disease by reducing the build-up of plaque/tartar (5).

This is another species of seaweed, which gets its redness from a compound called Astaxanthin. This is one of the most potent antioxidant, anti-inflammatory and immune-boosting compounds found. It is also proven to help support skin health and even repair DNA (7).

Although we make zero medicinal claims about our products, we are pleased to say that verified buyers have noted a positive change in their dogs’ general health since they decided to #GoRocketo. You can see their comments in our Reviews section.

If your dog is on a vegan diet for whatever reason, ask your veterinarian about including this product into your dog’s diet, then let us know what they say!

Otherwise, feel free to try it as an everyday topper to your dog’s normal diet.

Click here to know more about Andrew, or meet him on LinkedIn.